(No reviews yet) Write a Review

Blue Power Kit has connection option for vehicle tracking and telemetry system, which allow to control precise diesel and LPG consumption over the GSM network as well as remote gas ECU and fleet management.

The system has two independent protections against uneconomical style of machine operation. The first degree is system adjustment which prevents a user from using a full uneconomical gas-diesel power. A second degree is control system and working parameters registration system. It informs the driver and the company about the driving style impact on consumption. 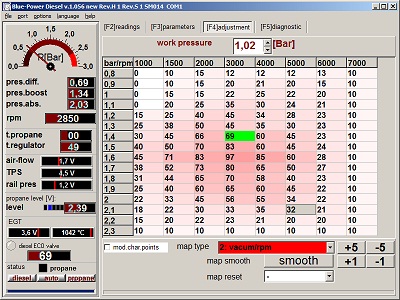 System is based on a comprehensive analysis of diesel operation cycle. It is a bad practice to transfer a direct petrol engine sequential control into diesel. A sequential control which is perfect for petrol engines can cause a diesel engine damage and does not bring any benefits. It is a common knowledge that fuel injection in diesel engines occurs at the moment of compression rather than at during suction, as it is the case with petrol engines. A gas sequential injection to diesel engine requires a considerably shorter injection and precise synchronization. Such a solution increases a failure rate when compared our patented idea. Let’s consider one of the most frequent failures – injector mechanical failure. In the case of the petrol engine, one of cylinders will be over-fuelled, a signal lamp will light up, service will replace the injector. As for diesel, if gas is supplied on a regular basis, change of blend composition in a single cylinder will cause a permanent cylinder damage and lead to expensive replacement of engine.

Dual fuel system is based on the combination of 2 fuels. We economize because we replace part of diesel oil with gas. Application of the innovative auto-adaptation system assures increased gas content in the blend when compared to the traditional control. As a manufacturer, we suggest using proportions up to 30% of LPG and 50% of CNG, which guarantee a proper system operation, as well as best engine performance conditions. Some of our customers use a significantly overstated gas proportions including costs for faster engine wear. As a manufacturer, we do not recommend such a practice and we do not provide guarantees in such cases.

Application of dual fuel system in the car causes engine power increase and a noticeable torque rise. The most important result of increased parameters is more convenient unit hauling with maximum tractor load.

When compared to monofuel system, its dual counterpart has additional tasks which increase the range. Petrol-powered cars which drive on gas consume mostly gas. As a result, we have an impression that the range goes up. In the dual fuel system, the volume of regularly consumed fuel increases which means the real range rises.

A resistance of gearboxes to extra power has been confirmed in a number of cars at huge distances. First cars with our installations were tested after they had covered over 300 thousand kilometers. The wear was similar to the cars devoid of dual fuel system.

6 Cylinders Vialle LSi - Liquid LPG Conversion Kit The LSi kit contains everything except the single hole tank. Choose the tank from: Single Hole Tank Range and contact us to receive our...
102102
Quick view